Justice and Fairness for All

Theresa Bui Creevy has been part of the Collin County community for more than 20 years.

She works tirelessly to represent her clients in various legal matters in Collin County and across Texas.

The Belief in Justice and Fairness

Everyone wants a judge that will be fair, impartial, and follow the law.  Every person deserves fairness and an opportunity to be fully heard.  Everyone wants justice. When judges don't have time to listen and hear out the parties, it's not fair and it's not justice. When there are delays by the court, it's not fair and it's not justice. Justice delayed is justice denied.  Political affiliation has no place in the courtroom. The judge's personal views and beliefs do not belong in the courtroom. It is never about the judge; it is always about the people or parties, their issues or disputes, and the rule of law.

Many come to court to have a judge or jury decide their case.  Judges should be respectful of their time, as well as their attorney's time.  But at times, some judges will have a bad disposition or temperament.  It is important for a judge to be even-tempered and assess the situation properly.

Experience for the Court

Out of law school, Theresa practiced law as an insurance defense attorney.  After 4 years, she left and started her own private law practice.  Theresa then added family law and criminal law to her practice.  She has represented plaintiffs, defendants, fathers, mothers, children, business.  She has fought for and she has defended her clients in various cases.  She understands that these cases or disputes may be the most important thing to that plaintiff, defendant, business, father, mother, or child.  That a ruling by a judge could have devastating consequences.  So it's important to elect a judge who understands the law, knows the law, will follow the law, in all these areas of law.

B.A. in Political Science, College of Letters, Arts and Science, 1989

The Patrick E. Higginbotham American Inn of Court (Past Member)

For Fairness and Justice!

Theresa Bui Creevy's broad experience makes her well-suited to handle the types of cases that are heard by the 416th District Court, with jurisdiction in Collin County.

Theresa Bui Creevy was born in Vietnam and emigrated to the U.S. in 1975 at the age of 8. Theresa became a U.S. citizen shortly thereafter. She grew up in Dallas and attended public schools, then graduated from the University of Southern California in 1989 with her Bachelor of Arts. She later attended Texas Wesleyan University School of Law and graduated in 1996 with her Juris Doctor. Theresa and her husband Scott live in Richardson, Texas and have been residents of Collin County for the past 20 years. They have three daughters: Lexie, Katherine and Emily, all of whom attended Plano ISD schools. Emily is currently attending Texas A&M University and Katie will attend Pace University in New York this August. 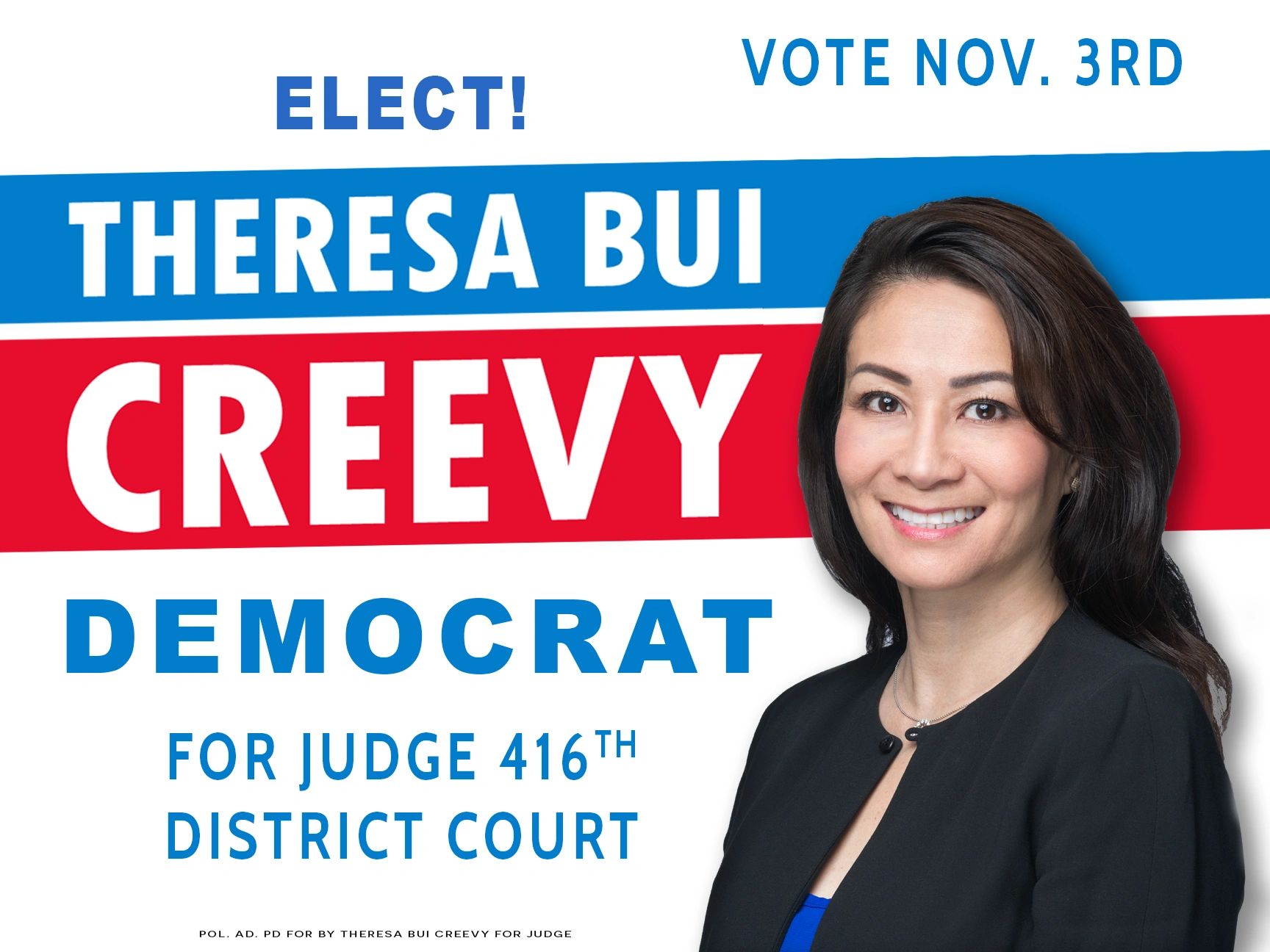 PLEASE VOTE FOR ME!

Help with the Campaign

Support Theresa Bui Creevy for Judge by volunteering and donating money.  Your donation, big or small, will be appreciated.  Your donation will go towards campaign yard signs, road signs, mailers, and digital marketing.

Sign up to receive updates from the candidate on the trail!

Early Voting for all counties in Texas is from Oct 13  through Oct 30th.

THE SUMMER OF JUSTICE continues virtually, this coming Monday in Collin and Rockwall Counties - Monday, August 24, 2020, 6-7pm. Moderated by...

* No endorsements are being made for any candidates listed or pictured